84 photos
Association football, more commonly known as football or soccer (especially in countries where another sport is commonly referred to as "football"), is a sport played between two teams of eleven players with a spherical ball.

At the turn of the 21st century, the game was played by over 250 million players in over 200 countries, making it the world's most popular sport. The game is played on a rectangular field of grass or green artificial turf, with a goal in the middle of each of the short ends. The object of the game is to score by kicking the ball into the opposing goal.
© Kaushal Gandhi - Photography 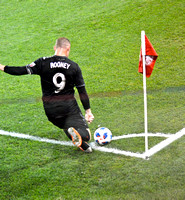